Back to Spelean Geochemistry
Caves each have their own unique atmospheric chemistry and a distinct barometric response to external pressure changes. These characteristic footprints can vary from simplistic linear responses to highly complex multivariate systems with numerous feedback loops.  The following sections discuss first the causes of airflow within caves, and then the nature of that air from a geochemical standpoint. 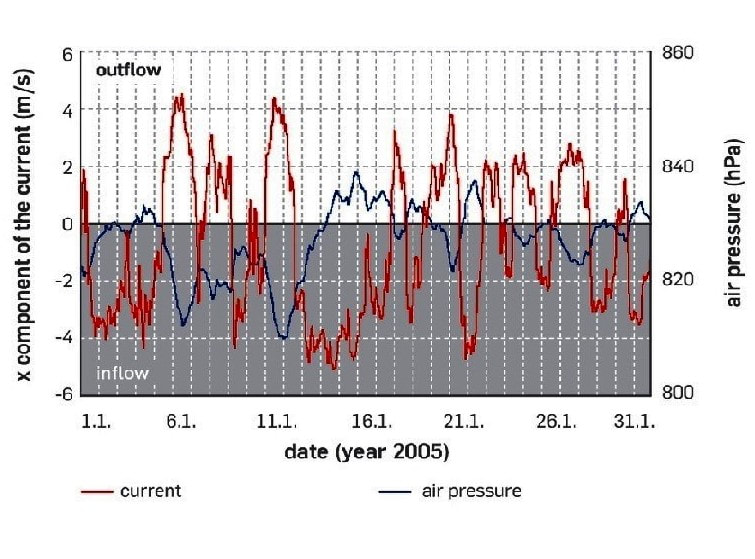 Jewel Cave Barometric Data - Andreas Pflitsch et al.
The last section will outline what is currently known about these atmospheric factors in Black Hills caves, who is doing the research, and a bit about the ongoing projects here in the Hills.
Cave Barometry & Airflow
In general, the larger the cave’s volume, the more substantial will be the flow of air in and out with a given change in barometric pressure. Other factors that determine flow rate are the size, number and elevations of any openings back to the surface. 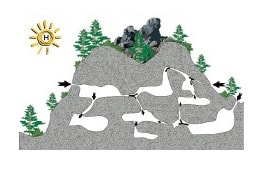 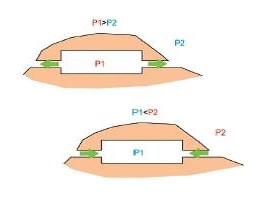 Barometric Behavior Depends on Cavity Volume, and the Number & Size of Openings 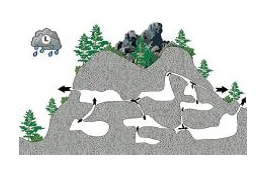 Barometric Exhale Cycle (Low Pressure)
The response observed from barometric and other physical changes depends on a number of complexly interdependent factors that can either accentuate or retard flow under a given set of conditions.  A cave’s size, geometry, wall roughness and passage tortuosity all effect airflow characteristics, as do the relative sizes and proximity of openings to one another.
Caves can breathe for a number of different reasons.  Barometric shifts are one of the primary drivers for flow, but movement may also be induced from chimney effects and wind variations when there is an elevation difference between multiple openings.

It is not uncommon for a breathing cave to have contributions to it's flow patterns from more than one of the above mechanisms.  Careful observations and flow measurements are usually required to separate the effects of each.
In a barometric cave where the number of openings are few, and in which the effects of chimney flow are minimal to absent, the inflow and outflow rates will be directly related to the system's volume.  This means that the cave's ultimate volume or "size" can be estimated for the portions of the system above the water table.

Additionally, if enough is known about the average passage characteristics in the portions that are mapped, a tentative"length" can be approximated for the system.  Cave barometry is an extremely powerful tool in the assessment of the significance and size of cave resources.
Cave Atmospheric Chemistry
The chemistry of spelean atmospheres are by no means static or simple in terms of gaseous makeup.  Depending on the types of carbonates present, the minor and trace element contents of those carbonates and their proximity to other nearby lithologies, a cave’s geochemical signature can vary from relatively uniform to highly complex.

In general, larger caves with fewer entrances have more complex and unique atmospheres, but smaller caves can have distinct and surprisingly multifaceted signatures as well.

All of the gases present in the outside atmosphere are also found in the average cave system.  Given this framework, there will typically be compositional shifts within the cave's atmosphere that have been induced by the geochemistry and biochemistry of the wall rock and biota present.  The cave’s barometry, geometry and temperature also play a key role in determining the flow and exchange rates of the interior air with the outside as well as the diffusion of cave specific gaseous components outwards.

The following chart shows all of the major atmospheric gases and a suite of others that have been recognized and studied in various cave systems worldwide.  This list is by no means all inclusive, as many others are possible.  The average atmospheric value for each gas is listed as an index for assessing possible anomalous concentrations in a cave's environment.  Some of the most likely sources for an anomalous gas concentration are also given. 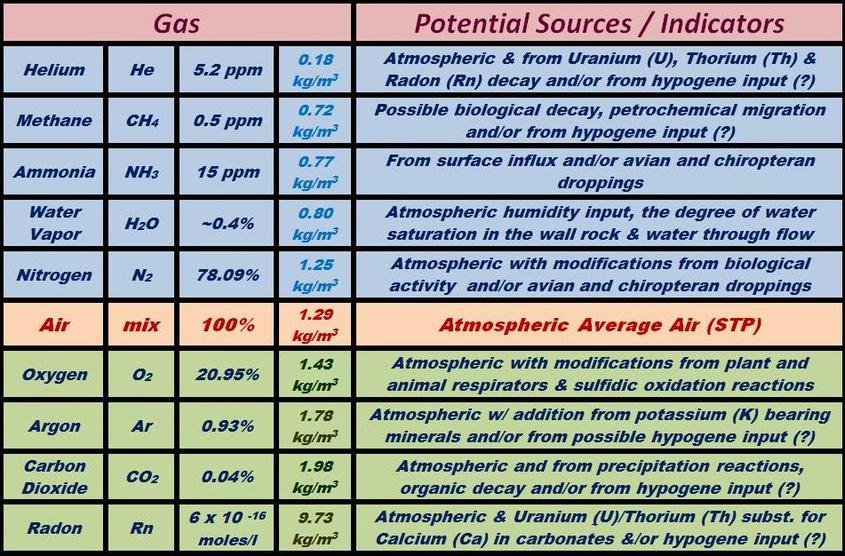 The lighter-than-air gases are all highlighted in blue at the top of the list, and will diffuse rapidly if generated within the cave environment.  Anomalous levels of these gases in a cave's atmosphere would therefore indicate  a relatively high inward flux rate, or a very slow rate of exchange with the surface.  The light gases will typically have the most variable concentrations within cave air over time due to their lower densities and higher diffusion rates relative to  the average air mixture.

The heavier-than-air gases are all highlighted in green at the bottom of the chart, and in general will tend to be enriched in cave environments that have passages below the levels of any entrances. Heavy gases usually have the highest residence time and consistent gas compositions within a given cave, as the rates  of exchange and diffusion are slower and they often have higher concentrations in areas of stagnated flow.  The three heavier than air gases that have the highest probability of enrichment in spelean environments are:
Click on one of the above links for more information on the nature and distribution of these heavy gas components of cave atmospheres.
Current Research Relating to Black Hills Cave Barometry and Atmospheric Geochemistry