Back to Cave Air Dynamics & Geochemistry 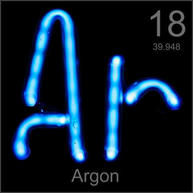 Argon (Ar) makes up 1.3% of our atmosphere by weight and 0.934 % by volume.  It can also be found everywhere dispersed through the pore space of rocks within the earth's interior. Although held tightly within defects and holes within crystal lattices, it is released during heating events, and being a gas,  will eventually make it way to the atmosphere.  A major portion of the terrestrial pool of argon has been produced since the Earth's formation from the radioactive decay of the tiny amounts of the isotope potassium-40 (40-K = 0.012% of all potassium) found within potassium bearing minerals. Measuring the production of argon-40 (40-Ar) from the decay of 40-K is one of the more commonly used methods for determining the Earth's age (potassium-argon dating). 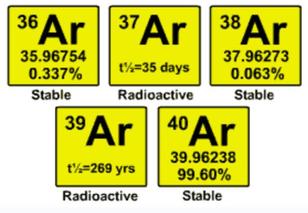 Naturally Occurring Argon Isotopes
Argon (Ar) is the most abundant of the inert Noble gases within our atmosphere. It is a colorless, odorless, non-reactive gas that is the 3rd to 4th most abundant gas (Ar vs. H2O) in the air that we breath and the atmospheres of caves.

Although atmospheric argon is ultimately derived from the decay of radioactive 40-K, it is not measurably radioactive itself and consists of just 3 stable isotopes.
Now for a bit of educated speculation on my part.  To the best of my knowledge,  the following theory on argon's ability to accumulate in cave air is untested. Be that as it may... 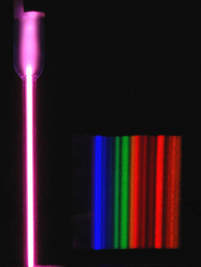 Argon's Spectral Lines
Under the right conditions,  therefore, argon (Ar) should accumulate in much the same way as does it's far less abundant noble gas cousin, radon (Rn) and/or carbon dioxide (CO2). 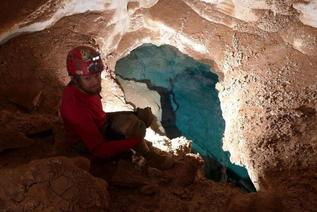 Hourglass Lake in Jewel Cave - Madison Aquifer Water Table
A few speculations as to the conditions under which argon (Ar) enrichment might occur would perhaps be germane at this juncture.
The Use of Argon Isotopes in Groundwater Dating & Source Area Characterization 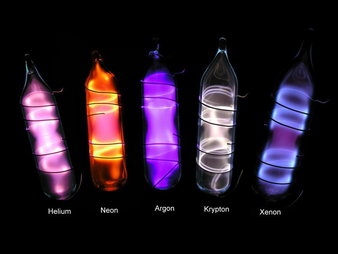 The Noble Gases
Argon’s chemical and isotopic properties make it an ideal tracer of Earth processes.  There is a considerable amount of information that argon isotopic compositions and concentrations can provide if the time and effort are put forth to acquire and assess them.

Noble gases like argon (Ar), helium (He), neon, (Ne), krypton (Kr) and xenon (Xe) are chemically inert and many of the complications that are common in interpreting isotopic data in other methodologies are absent when working with such tracers.

The patterns of noble gas isotopic variation are directly related to the source area and formations from which the gas originated and the path that it has taken prior to it's final destination. This is true of both the anhydrous gases contained in the pore spaces of formations and those that are dissolved in groundwater.  Although virtually all of the geochemical research done on argon isotopic variation has been done on groundwater, it should also be applicable to the argon that finds its way into cave air from formation gas sources.

Atmospheric Noble Gas Abundances
The patterns of Helium (He) and Argon (Ar) isotopic variation have been most widely studied, but Neon (Ne) Xenon (Xe) and Krypton (Kr) have more recently been looked at, as well.  Argon's abundance, however, makes it far easier to evaluated than most of the other noble gases.
Argon gas has about the same solubility in water as oxygen and thus can be readily dissolved in aqueous solutions. When surface precipitation enters the groundwater regime, it is generally saturated with argon and takes on its atmospheric isotopic signature.

The assumption in this method is that the water does not pick up any additional argon along the flow path.  Often enough, however, there are potassium mineral bearing lithologies within the aquifer. When there is dilution from additional argon, it is most likely to be due to radiogenic 40-Ar produced from reactions with these potassium bearing minerals within the rock matrix along the flow path (see below).  If the flow path for groundwater is dominantly through carbonates, however, argon dilution is less likely to be as prevalent, and in karst aquifers, flow paths restricted to carbonates is generally  the case. 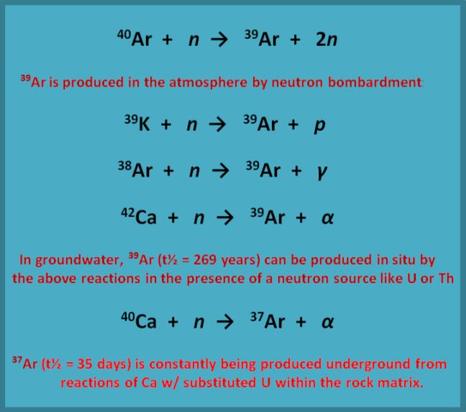 The ratios of radiogenic 37-Ar, 39-Ar, and 40-Ar concentrations in groundwater can also provide information about the relative ages of the different groundwater sources involved in cave formation. These ratios should also be reflected in cave atmospheric values when exchange with outside air is at a minimum and lithologic and groundwater contributions to cave air are the greatest (during the cool season)
The n(40-Ar)/n(36-Ar) Ratio in Groundwater Dating
The usage of 37-Ar levels as an aid in interpreting Argon Isotope patterns
The usage of 39-Ar in Groundwater Dating
Synopsis
Even though argon is one of the four most abundant components of cave air, it's variability in abundance and distribution within spelean environments is essentially an unknown. To the best of my ability to ascertain, it has not been studied in cave environments to date.  Argon is a heavier than air gas that should have the the potential to locally accumulate, very much like CO2 and it's radioactive noble gas cousin radon (Rn).  This gas should therefore be subject to variability in concentration and distribution due to oscillations in cave air dynamics.

Like radon, argon bears a radiogenic isotopic signature and has be used successfully as a tracer of  geochemical processes within lithologic and hydrologic systems.  By inference , argon should also be useful as a tracer of these processes as they are uniquely expressed in cave environments.

A systematic look at argon abundances and isotopic patterns within cave air and waters would seem overdue, but as a geochemist who is also a caver, that's just might be my personal bias shining through.  So be it.
Back to Cave Air Dynamics & Geochemistry
"the eternal recurrence of the same"
Also sprach Zarathustra - Friedrich Nietzsche