Black Hills Speleogenesis
Back to the Karst Page
This section is basically my geological mantra (some would say rant) surmised from reasonably detailed observations over the years and reliable geochemical information, but certainly not the final word on this subject.   Just an educated guess from a decidedly opinionated guy.
"You can't depend on your eyes when your imagination is out of focus."
Samuel Clemens-Mark Twain
This is not to imply that the region does not have sinkholes and other observable surficial karst features, but only that they are far more limited in distribution than in most other major cave terrains, especially considering the number and size of the cave systems present.

There has most certainly been more than one period of speleogenesis within the Madison  formation, as there is observable stratigraphic evidence that the overlying Minnelusa formation has in some places infilled sinks and other karst features during its initial stages of sedimentation, and well before the deposition of the superjacent Permian and Jurassic age formations. This older Paleozoic age period of dissolution and cave development has often been referred to as "paleo-karst".

At least some of the infilling of Paleozoic age  karst, however, occurred well after the cycle of sedimentation was completed.

This period of infilling is associated with the concurrent dissolution of the gypsum and anhydrite in the Minnelusa during a much younger period of void formation that was simultaneously occurring within the underlying Madison (Pahasapa) Limestone. This period of karst development, which is responsible for most of the caves and karst found in the region today, is sometimes referred to as "neo-karst".

Fold and Fault Related Systems
The fold and fault systems on the margins of the Black Hills have substantially enhanced the porosity and permeability along these discrete and highly localized structural trends. The structural deformation adjacent to faults and folds also provides for the abundant low angle bedding-plane fissures and high angle stress fractures needed  to develop large scale cross and between channel flow paths.  Within these zones of enhanced porosity and permeability, any actively forming and/or preexisting phreatic channels can undergo significant enlargement and develop interconnections into complex three dimensional networks with a substantially greater volume.

The complex geometric style of these caves suggests that passage development involved  numerous interconnected phreatic loops in a confined aquifer setting. This environment implies one in which there was significant structural preparation, a substantial hydraulic gradient, high head pressure, variable but slow flow rates and a base level outlet to the system at significant distance from the source area of the solutions.

A substantial percentage of the passages in Black Hills caves tend to have low, flattened and anastomosing phreatic characteristics, and it is likely that the overlying confining layers were still largely in place during their formation. These passages are generally parallel or subparallel to bedding planes and do not typically "daylight" against the upper contact of the limestone in epigenetic sinks and/or other surface related features.

Many of the larger caves in the Black Hills uplift are labyrinthine style systems, with multiple levels and a highly complex series of interconnecting passages and loops. The passage geometries in these complex caves often mimic the trends of faults, folds and cross structures within the immediate area, suggesting a strong structural control on their development. A partial list of the complex multilevel caves currently explored in the Black Hills region includes such examples as:
The diagram below illustrates an idealized monoclinal fold along the margins of the Black Hills Uplift.  This situation represents a structural regime similar to that present during the speleogenesis of Stagebarn, Bethlehem and Wonderland caves.  Although the example illustrated here is that of a monocline, similar types of structural regimes are also expected to be associated with any major fold, fault, dome or subsidence basin located marginal or internal to the Black Hills uplift. 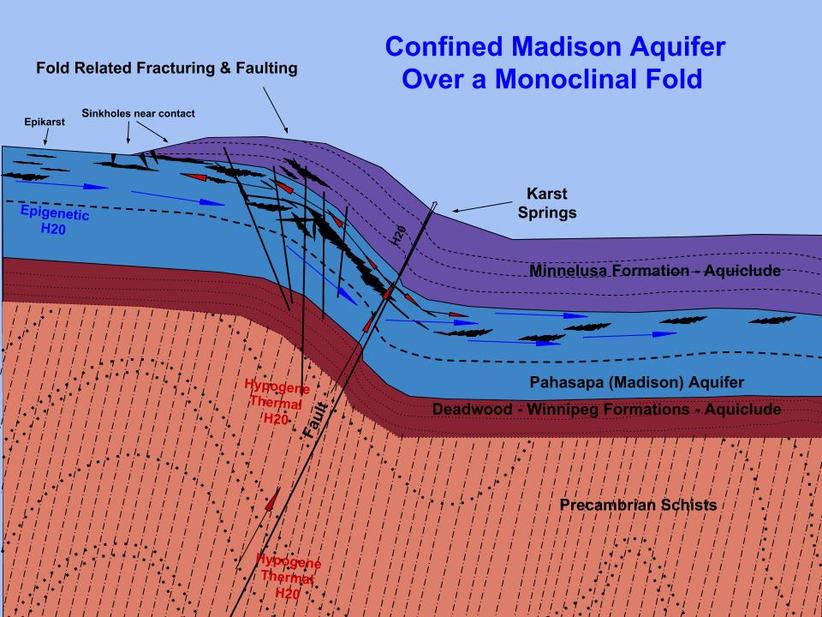 The following two diagrams show caves that are spatially associated with major folds and illustrate that the expected tension and shear directions associated with these major structures parallels the geometry of a significant number of the phreatic passages in these caves.  This correlation suggests that these caves are post deformational and that their speleogenesis can be related, at least in part, to the nearby structures. 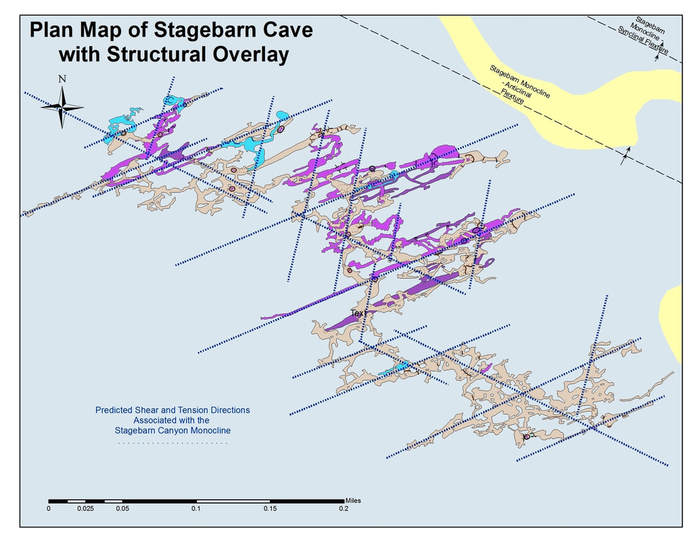 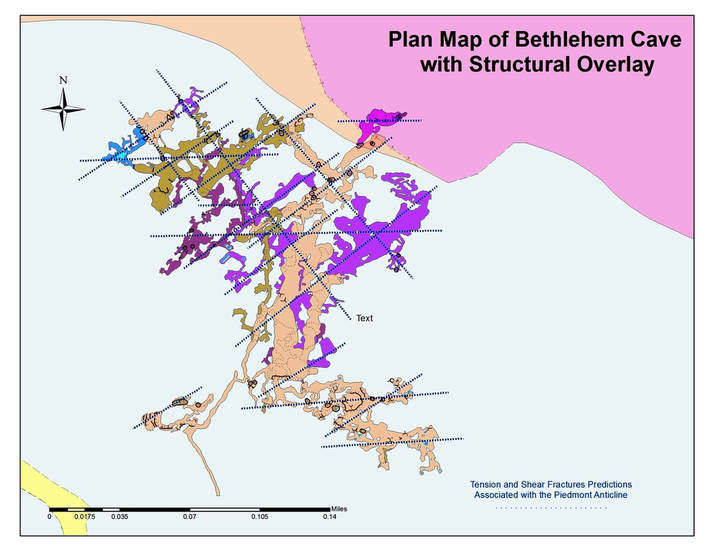 Bethlehem Cave showing phreatic passage alignment with the predicted tension and shears directions associated with the nearby Piedmont Monocline.
The anticlinal flexture of the monocline is directly south approximately 1500'.  The synclinal flexture is unmapped, but likely trends through the cave area.
The Jewel Cave Structural System 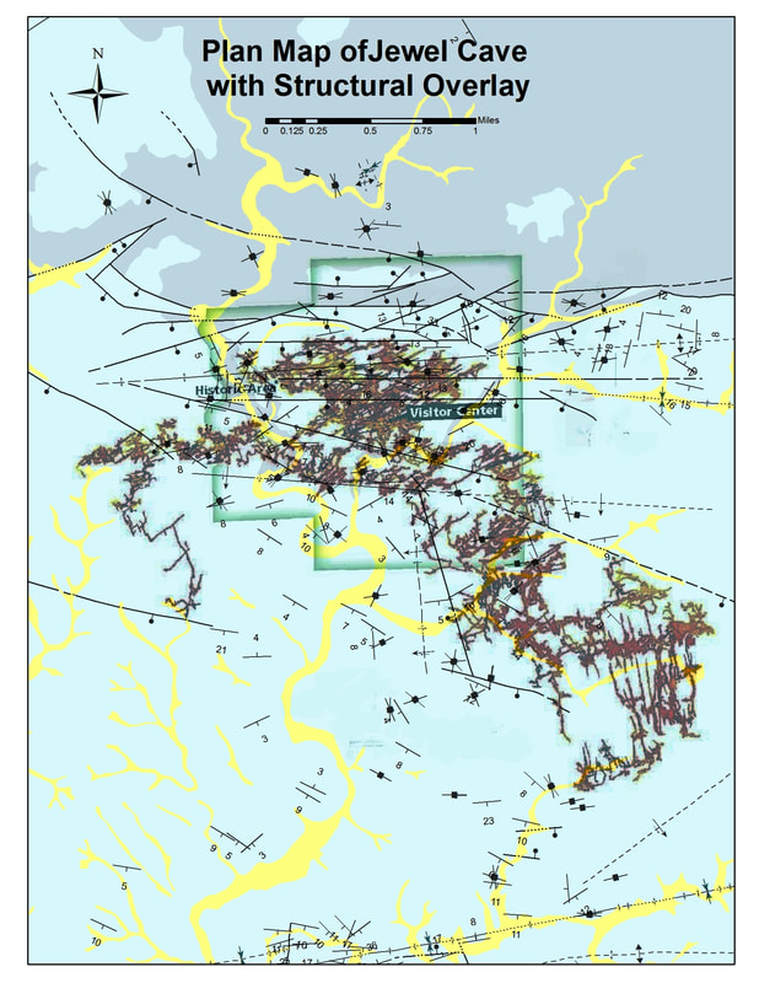 The above overlay of the surface structural map of the jewel cave area with the mapped passages in the cave shows a very close correspondence between the fault  and passage trends.
The Wind Cave Structural System 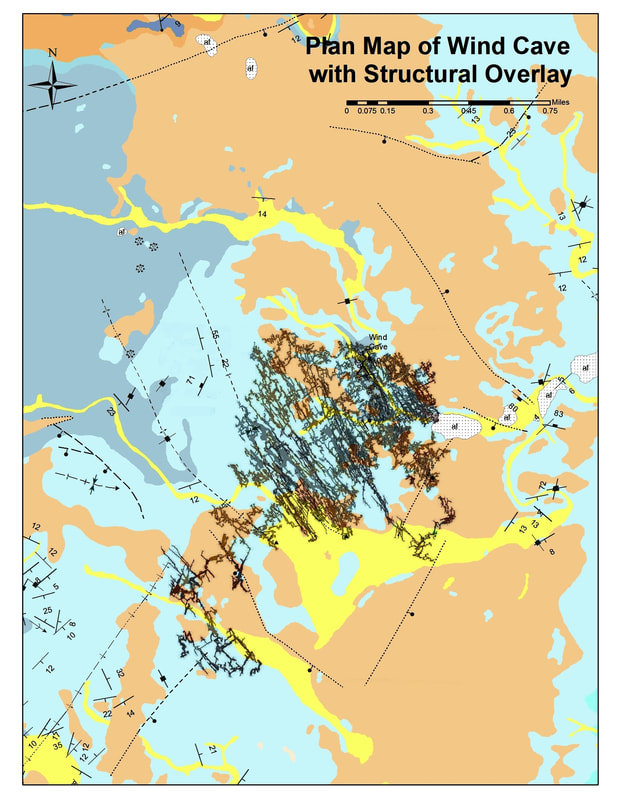 The Wind Cave system is spatially associated with a series of folds and faults associated with the Pringle Fault to the north.  The cave is dominantly developed on the NE limb of an anticline. Surface structures are difficult to map in this area due to large percentage of unconsolidated sediments that cover the bedrock in this area. All of the major structures mapped on the surface or underground, however, are oriented in a manner consistent with their having been a strong control on the development of the cave's phreatic network. (My opinion...there are others) 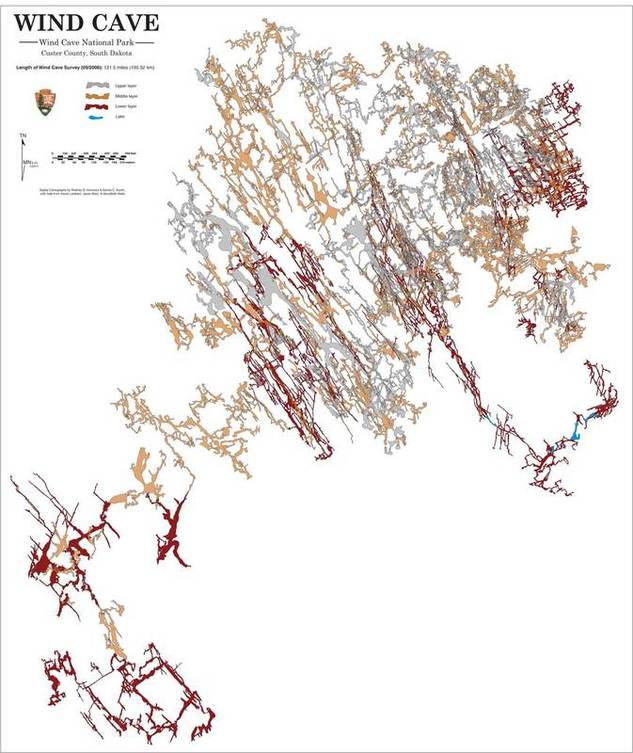 This diagram shows a closeup of the Wind Cave passage network.  All of the major NW trending passages/galleries parallel the Anticline and Syncline that trend through the cave system.  Most all of the cross passages are similarly oriented to the southwest, which is parallel to the Pringle fault and a series of associated faults close to the southern end of the mapped network.
Source of the Solutions
Ascension (Hypogene) vs. Descension (Supergene)
With respect to groundwater, the genesis of Black Hills caves has been attributed to a number of different theories and combinations thereof.  These include:

The available evidence (in my opinion) suggests that varying combinations of "hypogene" waters and supergene solutions are responsible for the most recent period of speleogenesis.

As to the thermal. non-thermal aspects of any of the ascending or laterally migrating solutions involved,  the Black Hills currently has a relatively high geothermal gradient and probably has had since at least the Eocene epoch, so it is not unreasonable to expect the involvement of thermal waters at some level in episodes of speleogenesis since that time.

As for the geochemical nature of the lixiviants involved or the involvement of any "hydrothermal" solutions or concentrated formation waters, that question is open to speculation, but is certainly not unreasonable.  There are many areas within the present day Madison aquifer with formation waters that qualify as brines and there is widespread evidence of hydrothermal solutions and their affects in the northern hills and Edgemont areas, so the possibility cannot be discounted.

I have a bit more observation and geochemical testing to do before I rant on further on that subject, but I rather lean towards the involvement of a thermal hypogene component due to its simplicity and a personal bias towards the validity and liberal application of Occam's razor until proven otherwise.

Definitely more about this later... particularly if I can arrange for some fluid inclusion studies of  dog-tooth spar from more than just one Black Hills cave.... like I said, this page is a work in progress.
Final (for now) Thoughts
The Madison (Pahasapa) limestone contains over 400 known caves within the Black Hills area.  At least two of these caves contain more than 100 miles of mapped passageways each and are currently ranked as the 2nd and 6th longest cave systems known on earth.  Many others in the hills region are a mile or more in length, and the list is growing every year.


In my opinion, we most likely have the largest cave system in the world under us...  maybe even two or three of the top five.  We just need to keep pushing those leads, walking those ridges, looking in the right places and using our heads and the best available science to guide our efforts.
Back to the Karst Page